The only subject I know anything about is myself and I don't know that too clearly. William Shatner

Leash in hand, I trot
beside you as we make
our daily visit to the mail box.

You lean into the leash,
my protector, my friend,
as if to say: Hurry.

Heat bakes our bones;
breeze tickles our ears
a girl and a terrier

Published in A Flicker of Hope: Poems written by a Wegener’s Granulomatosis Survivor in 2011. 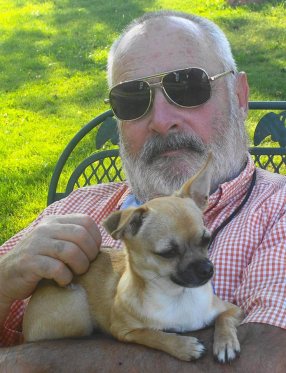 It has been two years since I held his hand as he slipped away from me. His christian name was Edward Dave Tune, but I called him Otto.

He wasn’t a Saint. His sense of humor was what took him through life and it is the one thing that I miss the most. So it is fitting that he died on “Talk like a Pirate Day.”

I used to have dreams that we buy an RV and go from State to State– sometimes in my dreams we would fly from planet to planet and find new places and new scenery.

He was the one that had no fear. He would stand on roofs and the edge of mountains. I am the cautious one. I would stand behind him on the cliffs so I wouldn’t fall. I miss that he would protect me. Up until I met him, I had never had anyone protect me. My exterior is tough because I have had to be that way. It was the same for him. He could scare people with just a look.

Inside I considered him my soft teddy bear. With him I was a better person, a kinder person. So I think of him with a tinge of sadness because I miss him so gawd damn much. I was much better with him. Yet,  I am so grateful that we had twenty-two years together.

So I had an appointment on Tuesday, a lunch on Wednesday, and another appointment today. Then at the beginning of next week after the holiday, I need to get my labs done to check my kidneys. In between I have been looking critically at what I have overflowing in closets and other spaces, and I have decided to get things cleaned, sold, or given away while I have the energy.

There is a thought in the back of my mind that I won’t have the time or energy to complete all of this in three months. Don’t ask me what is going to happen in three months because I don’t know. When I think that far ahead, I feel a heaviness that tells me another big change is coming.

I used to like change. When I was younger, moving to a new place wasn’t scary. I thought that adventure was seeing new places and making new friends. Then off I would go to another adventure in a new place with new friends. It changed when I had my huge health change. It wasn’t just a scare– it was an entire change of life. I had orders that I couldn’t be around large groups of people. Since I live near Las Vegas, it meant that while I was on a chemo like Cytoxan, I couldn’t go to events, theaters, or malls. My late-hubby used to take me to malls during the time of day when most people were doing other things. I carried wet wipes and we would wipe down every bench before I sat. I would walk twenty feet and then have to sit down again. Those were survival days.

When I lost my hubby, it was another huge change. It changed my physical, social, and mental frame of reference. I am still dealing with the aftershocks. I suspect this change that I am dreading has to do with my kidneys.

I notice that I cramp more at night even when I take vitamins and drink enough water. Sometimes I have a low- grade fever. Both of these symptoms can cause sleep deprivation which can cause the short-term cognitive problems. Or it might be the kidneys again. So last night I slept like the dead. It was good. The little doggy jumped up and down on my side before I woke up. I could have slept another two hours.

Change means that I meet new people and worry about getting new infections. On the other hand, I have met others who are dealing with some of the same problems. Plus I am learning tolerance for the ill and infirmed. Sadly, I had to become one of them before I could feel for them.

Still– I have cleared out things that I haven’t used or seen used in a decade or more. The apartment feels lighter.

The fourth of July weekend is here and if Otto was with us, he would be 69 next week. Two years ago this week, we were frantically going from doctor to doctor to find out why he didn’t feel good.The cancer word was being whispered.

Last night, I watched the clouds form. I sat in my chair, listened to the crack of thunder, watched the lightning, and counted the seconds between lightning and thunder.

I talked to him. If he were here physically we would have an upstairs apartment and he would be watching the storm. When I slipped onto the balcony with him, I would snuggle under his arm and we would watch the storm. I was safe there.

I was the gloomy one– the Eeyore. He was the one who knew how to smile at life’s idiosyncrasies. At the very least he always had a quip on his lips. I had heard most of his jokes — he cleaned them up in polite society, but when he was with his buddies, he had some of the funniest and dirtiest jokes around. I didn’t see his pranks, but I heard about some of them. Let’s say that there was a little bit of Loki in him.

He had to be more circumspect when he worked for the State– which is why I didn’t show this photo of him joking around an outhouse while he lived. Still this shows his spirit and what I loved most about him.

Funny– he had a hard start in life. He was a preemie and almost didn’t make it. He spent most of his young life in foster care. He had to learn how to take care of himself at a very young age. He was my light in a very dark world of chronic illness.

So I miss the door opening around five-ten p.m. in the evening. We also greeted each other with a kiss and a hug. I miss the smile, the jokes, and even those days when he couldn’t even muster a smile because his day had gone badly.

I miss his quizzes. He was a master at electronics and used to teach it in both the Army and the Navy. But mostly he was the one person in my life that saw me as worthwhile.

A strong man. A kind man. And sometimes a scary man.

He was a Vietnam Vet– and he did know how to protect us.

So I was up very early this morning before the sun peaked over the hills. Now, pink and peach mixed with dark blue sits on the horizon. This year 2015 is on its last breaths. It is too obvious to say that the new year starts tomorrow.

2015 was the year that I learned to live with a dog and without a husband, may he rest in peace. At the end of 2014, I still waited each evening after 5 p.m. to hear his footsteps. He would unlock the front door of our apartment and then I would hug and hold him. We did this little ritual for twenty-two years. Now I don’t look for him at five. My new ritual is I put food in the dog’s bowl.

I don’t listen for footsteps anymore. If I do hear them, it is usually coming from upstairs or next door.

2015 was the year that I learned that because I have lived through a decade of illness, doesn’t make the doctors impressed with my abilities to survive. In fact there seems to be an attitude in some of the hospitals that I should have died by now. I blame it on the callousness of ACA. I see a difference between what the doctors used to do and what they are allowed to do. I wonder sometimes if this will affect how people with chronic illness are treated in the future. How many people will live or die because it wasn’t in the allowed treatment plan.

2015 was the year that I learned that I could write again. I still struggle with putting my butt in my chair and writing… just writing. Now I know that I do have something interesting to say.

2015 was the year that I went to a therapist. When a non-judgmental person showed interest in my life and views, I was able to heal. I was not thriving before that — I was just waiting for my life to finish so that I could be with my late-husband.

This person validated my life. I could look back and see that my foundation is sound. I could look forward and realize that I still had things to do in my life.

So 2014 was an impossible year. 2015 was the year I began to dig from the depths of grief to some balance.

I will grieve for the end of my days. My late-husband taught me about companionship, family, and humor. Still 2016 looks brighter from the darkside of 2015. It looks much much brighter.

If you enjoyed my writings, please send a little to the popcorn and dog food fund.

She Called It, Wolf Fantasy